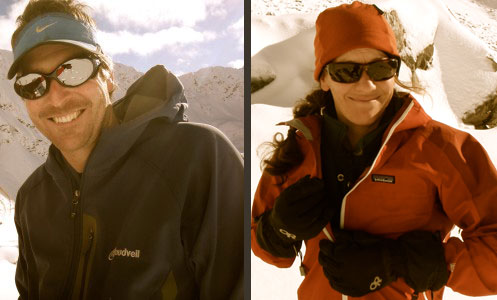 Blue Shadow are, Aaron and Adele.

Aaron grew up in rural Wanaka, “farming, shooting rabbits and dreaming of climbing”. From an early age he has used a sewing machine to patch up gear after adventuring around Otago’s hills, lakes and rivers. Aaron further damaged gear rock climbing, mountaineering and skiing in North America, Australia, Nepal, India and Bolivia. He has climbed New Zealand’s highest peaks, and discovered, explored and surveyed the two deepest caves in New Zealand.

Aaron has worked in Adventure Tourism, Outdoor Instruction, Farming and the Construction industries. “ I prefer constructing things than belaying abseils and padding out feedback.” He made the first prototypes of the Rope Tow Nutcracker Harness in winter 2011.

Adele is from Tauranga Moana. Even before she finished school, Adele was traveling overseas. After years of traveling and studying she came to live, work and play in Te Wai Pounamu. “One of my fondest memories is sitting at Aaron’s Mum’s sewing machine making chalk bags. Then climbing in Aaron’s old climbing shoes, with cardboard stuffed down the back to make them fit.” Adele now has a small pile of her own old climbing shoes. Adele has skied, climbed, and worked in Australia, the Himalayas, North America and Japan, and travelled and lived throughout Eastern Europe, Central Asia and South East Asia.

The first Blue Shadow product was born after years of skiing New Zealand’s unique Club Ski Fields. Small but significant, the Nutcracker Rope Tow Harness signifies quality and dedication to accessing the outdoors comfortably and with less hassle. Blue Shadow products are designed in the hills, the walks out, and drive back home. There they are rebuilt ready to be tested on the next trip.